Film is an integral part of what makes us who we are today. Through documenting the past and the discoveries individuals had the ability to develop their knowledge to that beyond anyone’s imagination.

Looking through the contemporary scenario of today’s world I can acknowledge how influential this medium is. Through simple gestures and actions, the idea of creating videos has become part of what makes our global society. From adverts, to Facebook links, YouTube hits and television propaganda, media stands as one important tool that feeds the global society with signs and symbols of our identity.

‘Aerial shoot’ – Being the shoot taken from a height, or high altitude manner

‘Black Lightning’– Using the camera and the foreground subject as a silhouette for the background.

‘Cut’– Is the distinction between one scene to the next

‘Jump cut’– Is when the shoots placed after each other have nothing to do with each other.

‘Deep focus’– When you have both foreground and background in focus

‘Dissolve’– The smooth transition from one scene to another

-“A term used to point to the continuity editing practice ensuring the logic of the look or gaze. In other words, eye line matching is based on the belief in mainstream cinema that when a character looks into off-screen space the spectator expects to see what he or she is looking at. Thus there will be a cut to show what is being looked at:

Eyeline then refers to the trajectory of the looking eye.”(Springhurst.org, n.d.)

‘Fade in’ – The transition into a scene

‘Fade out’– Transition out of the scene

‘Fill Light’– Is the key light used to eliminate hard shadows, and bring out the soft light of  a scene

‘Focus’– Is the sharpness adjusted for a shoot

‘Shot’– Is the distance from the camera to the subject in front of the camera. There different distances that one can find in film.

‘Subjective camera behaviour’ – Usually maintained with -High and Low Angle view of the character.-The wide view angle that the character is able to observe in called ‘Panning Shot.-‘Tracking shot’ suggesting movement in the camera 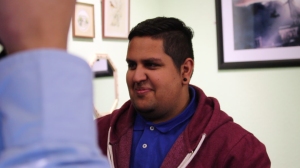