Brief:
During this week Promo, I have been part of the Ilford group footage media team. Being on Camera Sony Camcorder HD, Canon 650D and briefly on sound, I have been able to understand all the principalities that lie within production and lightning effect.

In this film production I have been able to work close with a persona that has a great deal of knowledge with photography and the process development of darkroom printing. Although I have been in contact with such a skill, I have increasingly immersed myself in the concept during such a filming experience. One of the increasingly impressive phrases that Steve Macleod has commented about was that of being consistent in the work that you set up to do whatever the field that you work on. Together with this he commented on the essentially of being able to communicate with the audience that you are set out to work with. Communication and constant work summary is one beneficial area that even through our documentary set up and filming was one crucial aspect that we followed in high standard.
The initial start of such footage was in fact good thinking and analytically understanding of the environment that we were set to work upon. From weeks ahead of this footage we have been increasing our focus in attaining and understanding the different media outlines that has enabled us to come up with such an outcome.
One of the significant points that we outlined clearly was that of establishing the environment that we are working in and the sound effect within such an environment. Having had demolishing for couple of days prior our footage has been of an increasingly stressful outlines that we have been working on in order to find a way how to deal with such an affective aspect. Together with this we had to establish a clean and a balanced out environment upon which we could have resolved the aspect of red lights and low darkroom light.
Light Set Up
The setup of the dark room was in fact one that had to be well set up in order to bring out a clear and a tangible crisp effect of the cameras operated. To do so we have worked with 3 set LED panels together with red gel filters in order to compensate for the noise produced in low light by cameras. Different scenes had to be set up in low safe light in order to get the actual developed paper processed together with this, we had to come up with the same footage but with lighter thus LED lit set up that allowed to compensate some light within the scene to make the footage in better light environment, thus reducing all the noise.
Sound Set Up
One other problem that we had to work on was that of sound and focusing on getting a good media recording output that has of an increasing significance in the final documentary produced. To do so we have come up with a three point system being that from Camera HD Sony Camcorder an output boom and a portable boom, together with the mark 3 Canon 5D inbuilt sound recorder. Having such a system we could understand and analysis the different levels that the persona’s pitch had and worked on establishing a balanced out formation.

Technical Problems
One of the technical problems that we initially faced was that of white light. The vibrant and harsh contrast that the shadow casted on to the protagonist was one that we tackled through the employment of inverse square law; by distancing further the light we had the ability to balance out a scene that eventually helped for further clarity in the scene as whole. Due to the fact that filter gels were placed on top on the LED panels, after long takes and footage the Gafa tape started to loose contact and thus we had to change all the materials in order to have no leaking white light during a safe red-light footage, which might affect the consistency that we sought to achieve during these days of filming.
Due to noise and out of focus technicalities that we had with the HD Sony Camcorder, we have been able to find a solution with the mark3 Canon 5D that has enabled us to film within such lightning conditions. Different positive technicalities that different cameras and lenses attain were all used in positive ways in order to have a great understanding and an outstanding result of the whole filming experience with Steve Macleod  Photography sessions. 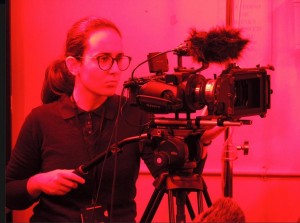 Images by Keith Media WWI FILM School
Footage and Backing up
One of the technical consistencies that we worked on was that of taking footage and replacing SD cards after a small amount of takes. In doing so we have been able to understand the technical problems and if there were any we could have resolved the whole thing instantly. This process has been an increasingly helpful thing, as we were able to see our development together with the building up of work that we evaluated as a whole group after footage sessions.
Communication for Steven Mcleod with a client has been one of the most significant aspects that enabled us to understand and comprehend well the need and the purposes of such a film.

Conclusion
One of the most significant outcomes that such a work shop has enabled me to understand is the technical principalities that lie within different parts that make up the whole idea of film production. The hands on experience has made me understand how deeply and clearly things are placed and integrated in connection to each other in order to establish and bring out such a positive and insightful film production. The different lightning techniques together with different experiments that we worked on in the past workshops has been an increasingly significant input that enabled such a positive video production. Although, Steve Macleod has talked within the area of photography, the qualities of production that he was talking about mark an increasingly insight in the field of video production.
The idea of time, patience, communication, understanding and working hard, are key points that I have been able to extract and keep a reminder in whatever I work on in life.